Hosting the Governor General at RMIT

During 2021, two journalism students from RMIT in Melbourne undertook an internship with Australian Black and White Stories, while four groups from the School of Media and Communication worked on a marketing plan for the company as their final year integrated learning project. These students were invited to show their work to The Governor-General, his Excellency General the Honourable David Hurley AC DSC [Retd] and Her Excellency Mrs Linda Hurley at a special end-of-year event facilitated by Black and White. 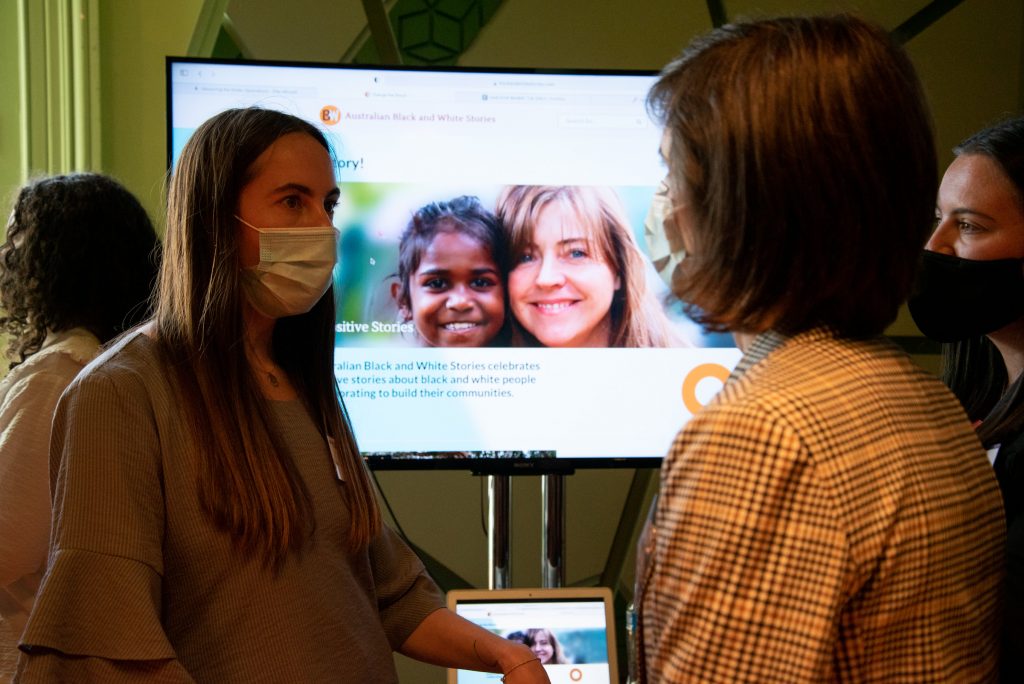 One of the journalism students, Sonia Liversidge, reflects on the day’s proceedings.

After eighteen months of mostly solitary online learning, I was lucky enough to be part of a group of  students to attend an in-person live event at RMIT’s city campus last month.

The event was hosted by RMIT and industry partner Phillipa O’Donnell, co-founder of Australian Black and White Stories. The Governor-General, his Excellency General the Honourable David Hurley AC DSC [Retd] and Her Excellency Mrs Linda Hurley were special guests on the day. Their Excellencies came to talk with students from RMIT’s School of Media and Communications, who shared some of their work produced for internships and reflected on experiences of studying through the pandemic.

There was some trepidation among students, me included, in returning to campus for a meeting for the first time in eighteen months There was excitement but some of us were unsure of what to expect on the day and even how we were to address these grandees. Some of us did a quick Google search of the Australian Governor General beforehand. We huddled in small groups inside RMIT’s Storey Hall as we waited for Their Excellencies to arrive.

Gheran Yarraman Steel, Reconciliation Advisor for the RMIT College of Business & Law and Traditional Custodian of the Boonwurrung Lands and Waters, performed a Welcome to Country.

“Reconciliation is not about words, it’s about sharing stories, listening, immersing and connecting,” she said.

“Our relationship with industry, exemplified by our work- integrated-learning projects and placements, is the RMIT difference. When people think of RMIT, they think of hands-on learning and graduates who hit the ground running in the industries of their choice,” she said.

Phillipa O’Donnell, co-founder of Australian Black and White Stories along with Mutthi Mutthi Elder Vicki Clark OAM, has been working with professional communications and journalism interns over the past academic year. I am privileged to be one of those students.

“We are thrilled our first public event was the first chance students, academics, support staff and outsiders (us) got to mix and mingle in person – albeit in masks – in a big, pubIic space at this fine Melbourne institution,” O’Donnell said.

Students presented in small groups on a range of WIL projects, including those produced for Black and White Stories. Projects ranged from Tik Tok videos to street art installations and podcasts.

Professional Communications student Sienna Curnow was one of three students to speak on a panel on the day about the experience of studying during COVID and as a graduate entering the workplace. She said working with O’Donnell and Black and White Stories gave her “an amazing opportunity to explore communications engagement in a reconciliation context”.

Expressing her gratitude for the opportunity to attend the event, journalism graduate Ellie Mitchell told me it was “cool to meet other students and see their work”. Mitchell did four internships in 2021 and said the experiences provided her with valuable resources for her future work as a professional journalist.

“The confidence boost as a young journalist when your ideas are embraced is huge, and the process of working with the editorial team to develop my stories was such valuable learning and formed the foundation for other work I went on to do this year,” she said.

Fellow journalism student Renee Davidson and I were fortunate to have a chat with their excellencies, who took a keen interest in the work presented by the students. I won’t lie, it was initially nerve wracking to hold out a microphone to the guests of honour. 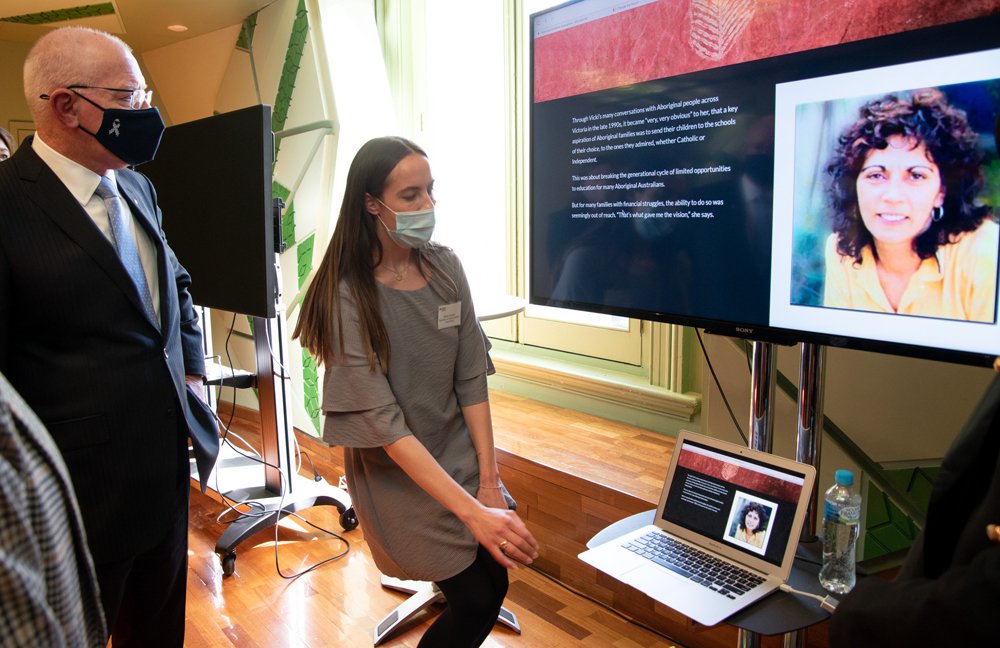 The Governor General told us the projects he witnessed on the day were “very powerful”.

“The students were out there in the real-world answering questions for people who need outcomes now. It’s not an academic process, it’s a real-world process,” he said.

Mrs Hurley was also impressed by the enthusiasm and innovation displayed by students.

“The thing that struck me most was their passion and their excitement and it’s fantastic to have people who are creative and who are wanting to invent new ways of doing things,” she said.

“During lockdown [Mrs Hurley] and I spent a lot of time talking to secondary students… and there was a lot of worry about mental health, so it’s interesting to hear from slighter older cohort who said ‘actually we learnt and grew out of this’… and learnt a lot about themselves in the process which was really exciting,” he said.

Ellie Mitchell said remote learning had both upsides and challenges.

“Three of my internships were remote, and I definitely missed out on making connections like you would in an office,” she said. “However, my supervisors and other journalists made every effort to connect online. A big upside was the self-directed nature of remote work. In an in-person setting you can turn to the person next to you and ask “what next?” When you’re working remote from home, I was pushed to use my initiative and trust my own decision making much more.”

I asked Mitchell how it felt meeting Their Excellencies.

“When I asked the Governor General how it had been performing his role throughout COVID, he said he was sick of Zoom! It was a nice icebreaker. Chatting with Their Excellencies, I was heartened to see such a genuine interest in student storytellers and Indigenous stories,” she said.

The day ended on a light note when Mrs Hurley suggested we join her in a sing-along. This was met with uncertainty around mask wearing and public singing rules. Fortunately for us, Mrs Hurley had a plan B and sang one of her own compositions, an uplifting tune to conclude a mutually fulfilling afternoon. 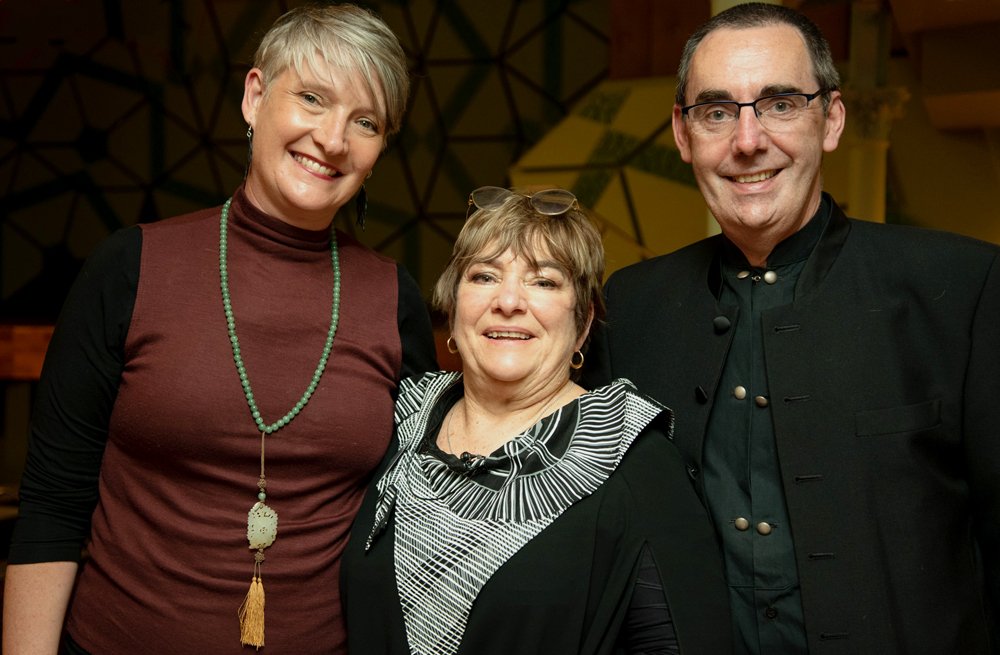